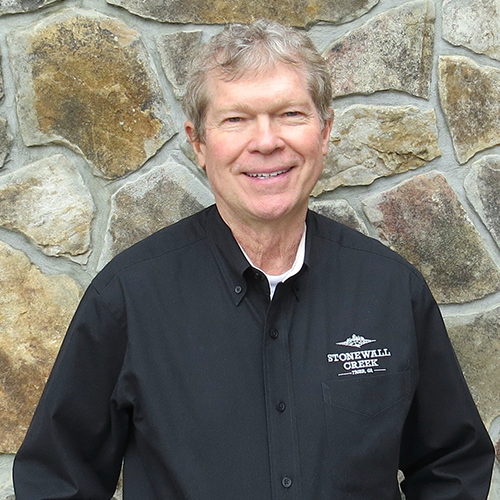 Mark is the owner and winemaker at Stonewall Creek Vineyards. He was born in California, raised in Michigan and moved to Georgia in 1980. In Atlanta he enjoyed a successful career as an orthopedic surgeon for over 30 years. Mark’s interest in winemaking began when he met his wife Sandi, and her Italian grandmother taught them how to make wine at home. In 2007 they started Due West Cellars, an award-winning amateur winemaking center. Mark was named one of the top amateur winemakers by the American Wine Society. His science background as a physician contributed to his ability to make a well-balanced wine. Mark traveled to Napa Valley, Lodi and the Sierra Foothills in California, as well as the Finger Lakes in New York to meet with winemakers and learn more about wine balance, fermentation and other winemaking tips and techniques. He became a Certified Wine Judge, as well as a Certified Specialist of Wine.

During his time at Due West Cellars, Mark reconnected with Carl Fackler, an orthopedic colleague who had retired and founded Stonewall Creek Vineyards.  Mark volunteered over the next several years at the vineyard, and when Carl and Carla Fackler decided to sell Stonewall Creek Vineyards, the door opened for a new chapter. Moving to Stonewall Creek Vineyards in rural Rabun County Georgia felt natural to Mark because he grew up in rural Michigan. He is living his retirement dream as a winemaker and vineyard owner. Mark and Sandi’s goal is simple; have fun with family and friends while growing grapes, and making and sharing the best wines in Georgia.

We're celebrating 10 years in our Tasting Room! Join us this summer as we celebrate through various events:click here