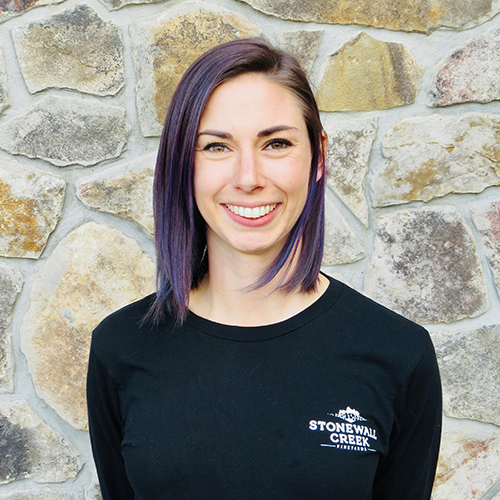 Rachael White is the Vineyard Manager at Stonewall Creek Vineyards. She keeps the vines in their best shape throughout the season to produce quality wine grapes. Rachael’s fascination with grapevines started before her college career while supporting viticulture research in 2013 at the Agriculture Research and Extension Center in her hometown in Virginia. With this introduction, she decided to pursue viticulture (the cultivation of grapevines) as a career in college at Virginia Tech which gave her opportunities to work in wineries in the area and allowed her to travel to Italy for a study abroad in May of 2016. Rachael received her BS from Virginia Tech in 2016, where she majored in horticulture and minored in viticulture. After graduating, she moved to New Zealand for a few months to work one season at a winery before returning home to pursue her master’s degree at the University of Georgia. Rachael graduated from UGA with an MS in horticulture in December 2019. She is thrilled to be a new addition to the Stonewall Creek team and will happily discuss her love of the vines, wines, and travel.

We are open for patio service and invite you to enjoy our wines by the bottle, glass or tasting flight on our covered patio or near our cozy fire pit outside. Our indoor service remains closed for now. To protect everyone's health, we continue to follow CDC guidelines. Please see ourFAQs about our response to COVID-19.