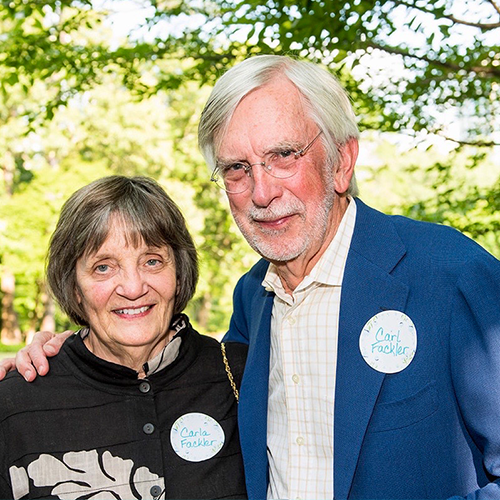 Carl and Carla met at the University of Iowa and married while he was a medical student and she was a graduate student. The next seven years were spent in Boston, where Carl completed his orthopedic residency at Harvard, and Camp LeJeune, N.C., where Carl served as a Lt. Commander with the U.S. Marines. With three sons in tow, they moved to Atlanta in 1977 where Carl practiced 30 years with Peachtree Orthopedics, including 22 as an Atlanta Braves doctor. Carla “mothered,” edited a magazine, and, along with Carl, supported their sons as they all earned Eagle Scout rank. Carla has volunteered with the Atlanta Symphony Orchestra for 30 years, serving as volunteer president, Symphony Ball Chair, and on the Board of Directors.

Three years prior to Carl’s planned retirement in 2007, they bought their first 10 acres in the Northeast Georgia Mountains and the next year planted 150 Malbec grapevines–the first of some 5,000 vines. Finding that the effort and expense of growing good quality grapes was more than current market value, they took the plunge into making wine.  Carl studied viticulture and enology at the University of California, Davis. They built a house with a winery/tasting room below and made their first Stonewall Creek wine in 2011. Each year, the business grew between 30-50% with their sales exceeding expenses for the first time in 2014. In need of more production space, they opened a new tasting room in 2015. In 2016, Stonewall Creek wines took the best dry white vinifera and the best dry red vinifera in the annual statewide competition.  The white went on to be named the best wine in the state.

Business continued to grow, and Carl and Carla grew older. In September 2018, Sandi and Mark Diehl took over Stonewall Creek Vineyards. Carl and Mark met some 30 years ago when Mark was an orthopedics resident and reconnected as medical volunteers at the 1996 Olympics.  A few years later, Sandi saw a mention of Carl and the vineyard in a magazine and soon both she and Mark were up planting vines and harvesting grapes. The beginning of a new story….